CSD Ignores Federal and State Billboard Laws
11 of 14 approved billboards are now 5-years late and may not be erected.
3 recently built billboards could be later ordered removed by court.
Spike Lynch's proposed billboard dynasty is in serious trouble.
What the hell is going on?

During Newberry CSD's November meeting last year, the Board fragrantly ignored federal and state laws restricting new billboards along Interstates 15 and 40.  In order to exercise some control over the monetary bribes promised to them by Spike Lynch for supporting the illegal billboards, the CSD Board endorsed a scheme to assist in the distribution of Spike Lynch's promised money.

Originally, Spike Lynch, the principle promoter of the billboards in Newberry Springs, had promised a straight 40% cut of his bribe money to go directly to the Newberry CSD; but he later reneged on his promise, changing it to whatever the CSD could acquire from a kickback "Super Committee" that Lynch established with his cronies that he can influence.

The Newberry CSD became further entangled in the depraved bribe distribution when it voted (Agenda Item 9 B) and formally placed board member Robert Royalty (to represent the CSD) upon the "Super Committee."  Voting for participation in the payola distribution scandal were Directors Deborah Farrington, Robert Royalty, Robert Seeley, and Diana Williams; abstaining was Director Wayne Snively.

The "Super Committee" is believed by some to be a mechanism established by Spike Lynch to launder the bribe money's distribution at "arm's length" from General Outdoor Advertising ("GOA"), the billboard syndicate's funding source.

The Newberry Springs' conflict with federal and state billboard law was originally triggered by Spike Lynch who started campaigning for the allowance of his family's billboard company, General Outdoor Advertising, to build numerous double-faced billboards along Interstate-15 and Interstate-40.

By 2006, the Newberry CSD had joined a minority of Newberry citizens listed in the Silver Valley's Repository of Shame (click then Ctrl F to search for a name • Command F on Macs), who had been snared by Spike Lynch's luring promises.  The Names of Shame were collected by Spike Lynch on a petition he had widely circulated and had publicly paraded.

Lynch's campaign has been highly endorsed and spirited by community real estate broker Sandra Brittian, who owns property adjacent to Interstate-40 that was at one time designated as a valuable billboard site.  Brittian has, and continues, to use her position on various community organizations, including the local Chamber of Commerce, to promote Lynch's billboards that one-day, she apparently hopes, may again include a billboard on her property.

After Spike Lynch's brother, Tim Lynch, paid thousands of dollars into then county Supervisor Bill Postmus' political coffers, the San Bernardino County Board of Supervisors on September 12, 2006, under the heavy influence and insistence by its Chairman of the Board, Bill Postmus, approved 14 GOA billboard permits; with the billboard parcel sites also being granted a General Plan update and rezoning of parcels that are required for the placement of each billboard. 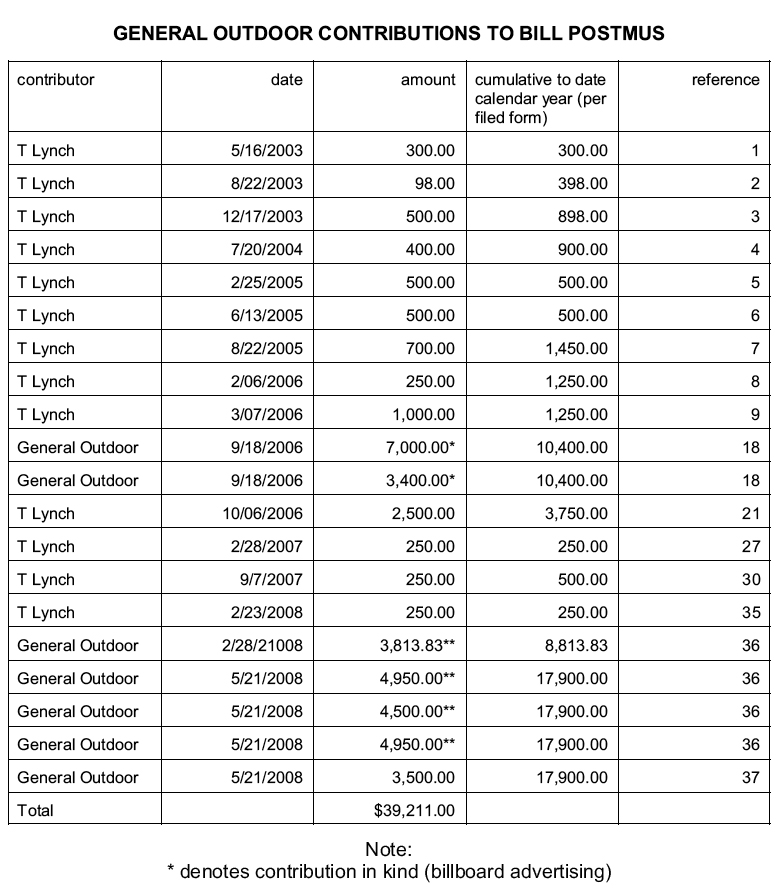 Table presented in Fred Stearn's motion petitioning a Court Order for discovery.
Note: The Board of Supervisors granted the billboard permits on September 12, 2006;
Postmus' political coffers were then rewarded with a spike of $10,400 within 6-days
and an additional $2,500 within 30-days. The above table are the transactions known.


Intentional violations of the law !

In Newberry Springs, crafty Spike Lynch attempted to fudge the law by slithering-in billboards on a "business area" exception to the law (Bus. & Professions Code § 5402 et seq.) by having residential land parcels rezoned as commercial in a greasy loophole transaction and then simply using them as commercial business billboard sites.

This, however, is an incredibly naive attempt to circumvent the law as there is far more to it, that Spike Lynch apparently doesn't accept.  The billboard law is not as superficial as Spike Lynch has joked, laughing that he has the granted county permits.

Each approved GOA billboard site violated the "business area" requirement as defined by the California Supreme Court (44 Cal.3d 242 (1988)) as rezoning specifically for billboard application is a violation of state law; and each rezoning approval is a violation of the federal Highway Beautification Act (23 USCA 131) which forbids new billboards "outside of urban areas," and subjects the state to a potential penalty of a 10% reduction of its federal highway funding for unlawfully placed billboard(s). (23 USCA 131(b), 23 C.F.R. § 750.708(b))

The law has been long clarified by the California Supreme Court that has interpreted "business areas" as zones of traditional business uses that "predominate, are concentrated and conglomerated."  Nothing like that legally exists in rural Newberry Springs.

The court has further ruled that the Legislature's intent is to concentrate billboards on those portions of the roadside that were already bordered by industrial plants and commercial enterprises. (United Outdoor vs. Business, Transportation and Housing Agency [Caltrans], 44 Cal.3d 242 (1988))   An isolated closed-down gas station or other rural, lone commercial oddity clearly does not meet the Supreme Court's definition of the law.

Spike Lynch and GOA are further dead-in-the-water regarding their billboards in that zoning, as already stated above, "intended primarily to permit outdoor advertising structures is not recognized for outdoor advertising control purposes." (Federal law - 23 C.F.R. § 750.708(b))

In short, the remote and isolated billboard sites that the Lynch family have had rezoned from residential to commercial, and in instances have placed 3 huge billboards upon, do not meet the strict standard of California and Federal billboard law.  And the county knowingly violated the law in issuing the permits under then supervisor, Bill Postmus, who the Lynch's syndicate had provided substantial amounts of money to.

In a 2008 County of San Bernardino Superior Court civil action, CIVSS803213, The People vs. General Outdoor Advertising, People's Exhibit B-1 estimates that the 10% of federal highway funding would equate to a loss of between $80 million and $100 million to the state of California each year.  The court matter, by the way, involved General Outdoor erecting a billboard in the City of Rialto, along Interstate-210 without a necessary permit issued by the California Department of Transportation which must regulate billboards under the state's Outdoor Advertising Act (BP § 5200 et seq.).

Meanwhile, a current civil action by Fred Stearn, the Newberry Springs Super Action real estate broker, calls the Newberry Springs billboard rezoning "phony zoning."  In 2006, Stearn took the county and General Outdoor Advertising to court to have the billboard permits rescinded in order "to protect the public investment in roads" and to protect the prestine desert from the visual pollution of billboards.  Stearn's public interest legal action does not seek any personal monetary gain; and it is still grinding through the courts.

On January 17, 2012, Stearn's legal action will be again before the Superior Court at which time Stearn is petitioning for a Court Order to allow him the right to commence discovery to "probe crucial matters" as to "how and why the County approved billboard Conditional Use Permits (CUP) in locations that do not satisfy the California Supreme Court's interpretation of "business areas" that violate federal law, and how General's request for new billboards led to the general plan update and rezoning actions that affected primarily (if not exclusively) land parcels where General proposed to put new billboards."


Depending upon what is discovered during the depositions, the list could be expanded.


Stearn's motion for discovery is procedural and is expected to be granted based upon any one of several meritorious grounds now presented before the court.  However, any decision in a courtroom is never guaranteed.

Discovery is key in making transparent exactly what impact Postmus' influence had upon the county departments recommending billboard applications that violated federal and state law; and why Environmental Impact Reports, that were earlier deemed absolutely necessary for the sites according to county Land Use Services, were suddenly illegally dropped as a requirement.

Depositions could lead to new discoveries and prosecutions.

Many simularities between the billboards and The Colonies.

Stearn's motion before the court also highlights a number of simularities between the issuance of the Newberry Springs billboard permits and the dirty Colonies Settlement in which Bill Postmus has pled guilty to felonious acts. 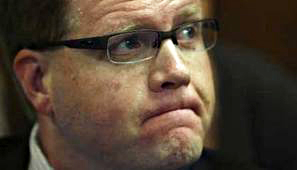 According to Stearn's pleadings, "Both matters were being prepared to go to the Board of Supervisors in the same time period (2006).  The Colonies Partners settlement was approved in November 2006; the matters challenged in this case were approved during the preceding month.  Both matters were being directed primarily by Postmus.  Both resulted in official actions which were contrived to appear legal and proper, but which were in fact illegal and improper.  Both show a pattern of contributions made or promised by a party who had a big-money matter pending before the Board, requiring a majority vote."

Regarding his matter, Stearn further alleges that "Bill Postmus, who was Chairman of the County Board of Supervisors, used his power and influence to orchestrate approvals of the challenged actions, primarily to reward a reliable campaign contributor, General Outdoor and its president."

As GOA's money flowed into Bill Postmus political coffers for billboard support, similiar promises of GOA money and GOA free billboard space (which Sandra Brittian has now been using for many months for her Chamber of Commerce and CSD co-sponsored events) has been flowing to corrupt the CSD and various organizations within Newberry Springs.

The Newberry CSD's moral turpitude in placing its governmental support behind the billboard scheme, and the use of its political power and influence before the county in order to acquire monetary kickbacks from the " fruits of the poisonous tree,"  now seriously taints the Board's integrity as being corrupted and unfit to govern.

The Newberry CSD may be attempting to qualify as another interest for the county Grand Jury over it's acceptance of white-collar bribe money and billboard space for its earlier billboard support; and the CSD's earlier lobbying to the county by then CSD representative, Chairwoman Sandra Brittian.  Certainly, some members of the community do not appreciate such representation.

The county permitted billboards are worth millions of dollars if allowed to stand.  Spike Lynch has dedicated a good portion of his life to manipulating people and the obstacles to get the billboards.  Brother Tim Lynch has (and continues) to pour tens-of-thousands of dollars into legal expenses and overhead costs.  But the dream is none-the-less based upon illegal acts; and if Fred Stearn's requested discovery is allowed, Spike Lynch's shakey dream of a billboard empire may quickly crumble.

Then we can anticipate GOA (currently a legal partner with the county against Stearn) to quickly turn upon the county for damages in issuing GOA illegal permits that GOA had asked for and relied upon.