The most recent of the Baja Areawide Sustainability Plan meetings was held Monday night, March 16, 2015, at the Assembly of God Church in Newberry Springs.

For the first time visitors attending a water meeting, the meeting included an overview of earlier presented material.  Of prime interest to all was the presentation of the final direction that the Baja Areawide Sustainability Plan was centering on.

Holly Shiralipour, of the Natural Resources Conservation Service, an entity of the US Department of Agriculture (USDA), and Lance Eckhart, Principal Hydrogeologist with the Mojave Water Agency, presented the basics behind the final version of the Plan that is expected to be approved by the Watermaster for submission to Riverside Superior Court Judge Gloria Connor Trask.  The Watermaster adoption of the Plan is set for the March 25, 2015 Watermaster's agenda (No. 9).

The presentation centered around the 'Tier 1' aspects of the Plan which will be the portion of the Plan that initial emphasis will be placed on.  Since the January 5, 2015 public meeting where minimal producers packed the Newberry Springs Family Center (formally the Senior Center), the plan has expanded to include some of the concerns of the minimal producers, those pumping under 10-acre feet of water per year.  Minimal producers represent the vast majority of the valley's residents who currently operate approximately 1,200 wells.

The biggest carrot being pitched to the minimal producers in soliciting their support of the plan is a USDA program that offers easy to qualify, low interest loans for 30 years, to residents who have had their wells go dry due to farmers overdrafting the groundwater.  While this may be a helpful program for some who will have to dig new wells, it is not a grant.  The domestic well assistance program doesn't help residents on a limited income who don't have the funds to make the additional monthly payments.

Likewise, other programs for minimal producers, like the Cash for Grass, won't have much impact in Newberry Springs.

The big money in the water Plan is still targeting the greedy heavy pumpers.  Those who took advantage of corrupt governmental giveaway policies to rape the Mojave Valley's natural groundwater resources that took nature thousands of years to develop.  Some of that background is attached below in a communication from CEQA-NOW to Valerie Wiegenstein, manager of the Mojave Basin Area Watermaster.

Holly Shiralipour, Lance Eckhart, and those behind them, have put together a Plan of monumental data; and although they have reached out to the community's residents for input that they have genuinely included into the Plan, the Plan appears very weak

with a timetable of too many years of continuing overdraft.  The Plan further fails to address any long-term restoration plan for the aquifer.

In short, the Plan fails to address the true problem.  The necessity to stop the industrial farming of alfalfa and other high water intensive crops in the arid Mojave Valley desert.

The Plan is being centered upon an idealism of collaborative cooperation of all parties working together for the common good.  If this was ever realistic, the heavy pumpers would have years ago stopped overdrafting the groundwater from beneath their neighbors' homes.  But they haven't.  Although a couple farmers are converting some acreage to less intensive water crops, the majority of farmers plan to operate business as usual, with a few increasing their output.

Malfeasance in the federal government.

Shiralipour, a principal leader of the Plan's development, has done a fine job for her employer.  But that is the US government that originally mostly gave away the now alfalfa land to the farmers.  Since then, the USDA has been heavily subsidizing the heavy pumpers with highly favorable loans and grants to farm and purchase equipment, such as the pivots that have vastly increased the rapid depletion of the groundwater.  The USDA is a major coconspirator with the heavy pumpers.  Shiralipour's employer is about supporting agriculture and that is reflected in the emphasis of the money flow in the Plan.

The Plan's framework insults taxpayers and assaults their pocketbooks with recommended grandeur buyouts of the heavy pumpers' (government given) water rights of the PUBLIC's groundwater.  Yes, even more taxpayer giveaway money is recommended in the Plan to stop the farming and fallow the fields.  As threatened in a letter dated February 25, 2015 by farmer Glen Van Dam to the Mojave Watermaster and MWA Board of Directors, "It is likely that local farmers will play a role in realizing significant components of the Renewable Plan"  (Desert Renewal Energy Conservation Plan (DRECP)).  In short, give the farmers water or they'll turn the Mojave Valley into a solar farm.

The Newberry Springs Community Alliance finds that the Plan has attempted to include something for everyone to like, to get behind, and support.  Yet, that is not enough.  One can eventually finish a footrace by having a leg to hop on... to the finish line.  However, it requires two strong legs and a strong determination to win the race.  The Plan is a leg short; and lacks the determination necessary to adequately curtail the heavy pumpers that the USDA has invested in.

The USDA's conflict of interest lies in its job to keep the farmers operational.  That is the purpose of its existance.  It's not about the minimal producers.  A long, stretched-out timetable is desired by the USDA to maintain the financial viability of the heavy pumpers.  Meanwhile, it is the minimal producers' 1,200 wells (mostly residential) that are being damaged.

The state is calling for everyone within California to cut back their water usage by 20%; not 5% as the Watermaster's staff has decided to recommend; despite Alternative 'A' in the Plan suggesting 20%.  Since the 5-year rampdown plan of 2.5% annually has recently concluded in such a dismal failure, a 20% additional rampdown is now strongly warranted as a meaningful and necessary adjustment.

Additionally, the Newberry Springs Community Alliance is calling for the County of San Bernardino to simply correct the whole matter by enacting an EMERGENCY ordinance to cease the desert farming of all high water intensive crops.  The continued unsustainable pumping by farmers is causing an unacceptable health hazard by not only depleting the aquifer that residents must depend upon for survival, but the farmers are also destroying the groundwater's ability to ever recover as severe overpumping compacts the underground soil and prevents the ground from ever having its former water capacity.

As weak as the proposed Plan is, it is something that should be supported; but only as a starting point.

Among those attending the public meeting was Beverly Lowry and Jim Ventura, Board members of the Mojave Water Agency and members of the Watermaster Board; Ron Frame, local field representative for county Supervisor Robert Lovingood; and Chuck Bell, President of the Mojave Desert Resource Conservation District. 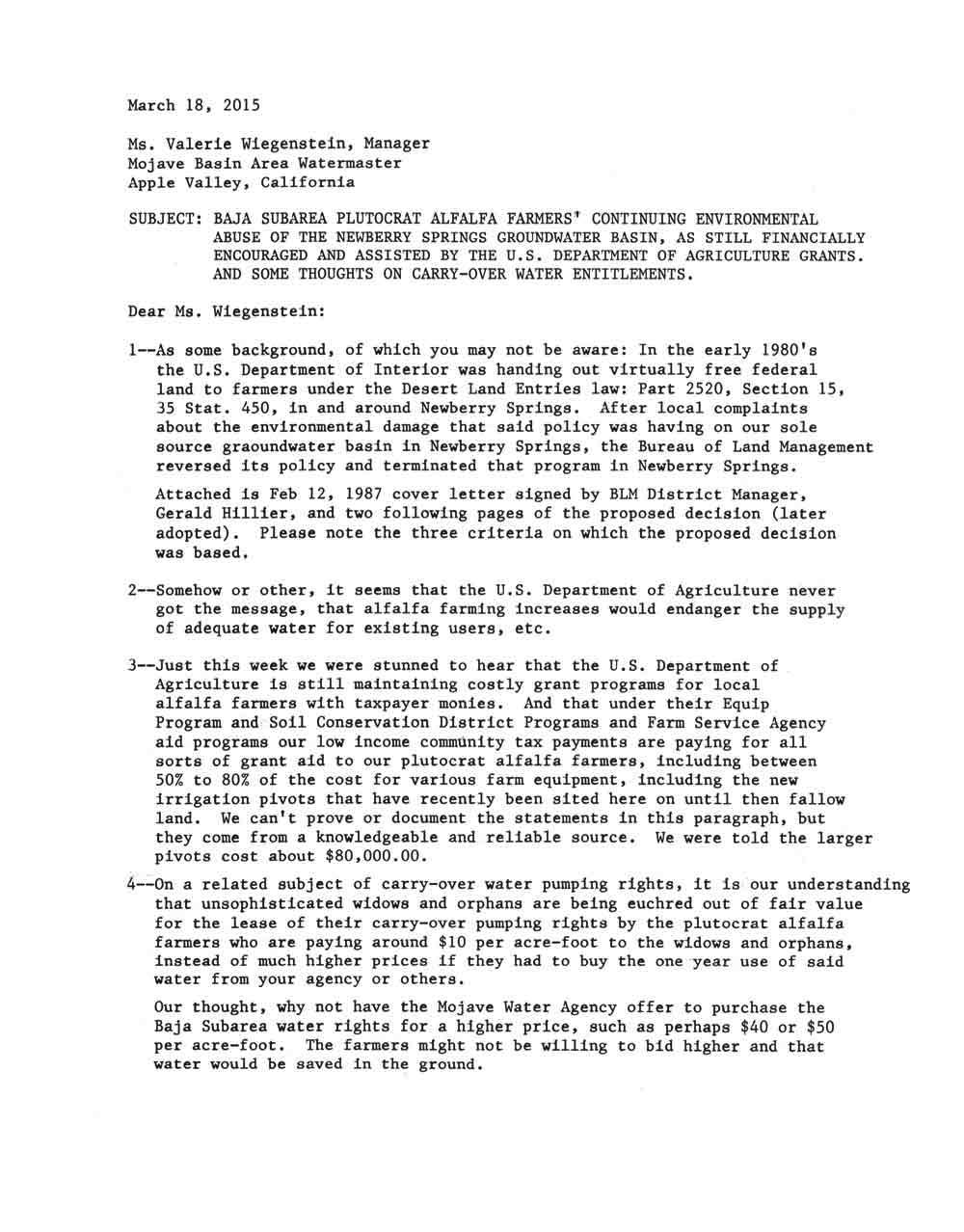 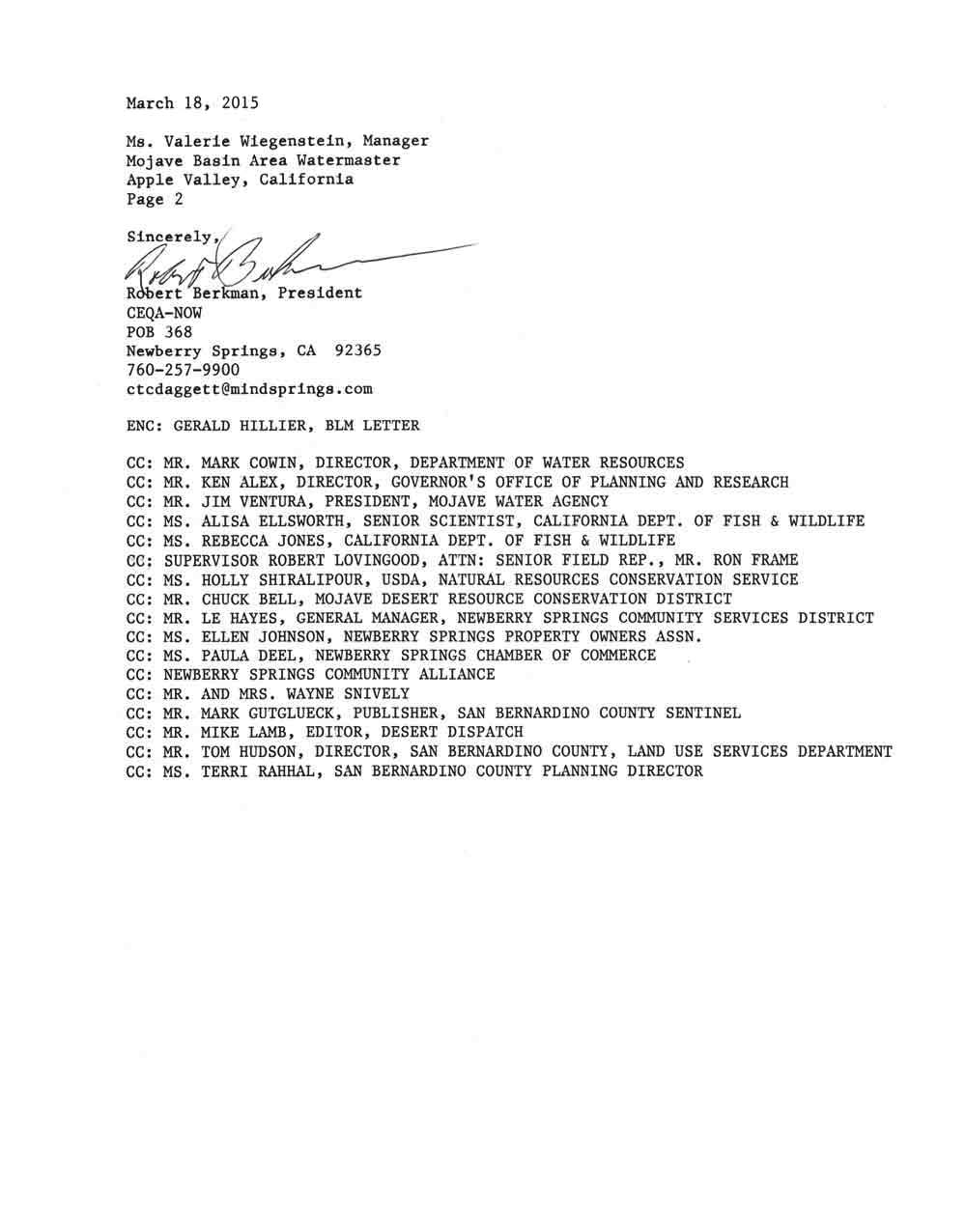 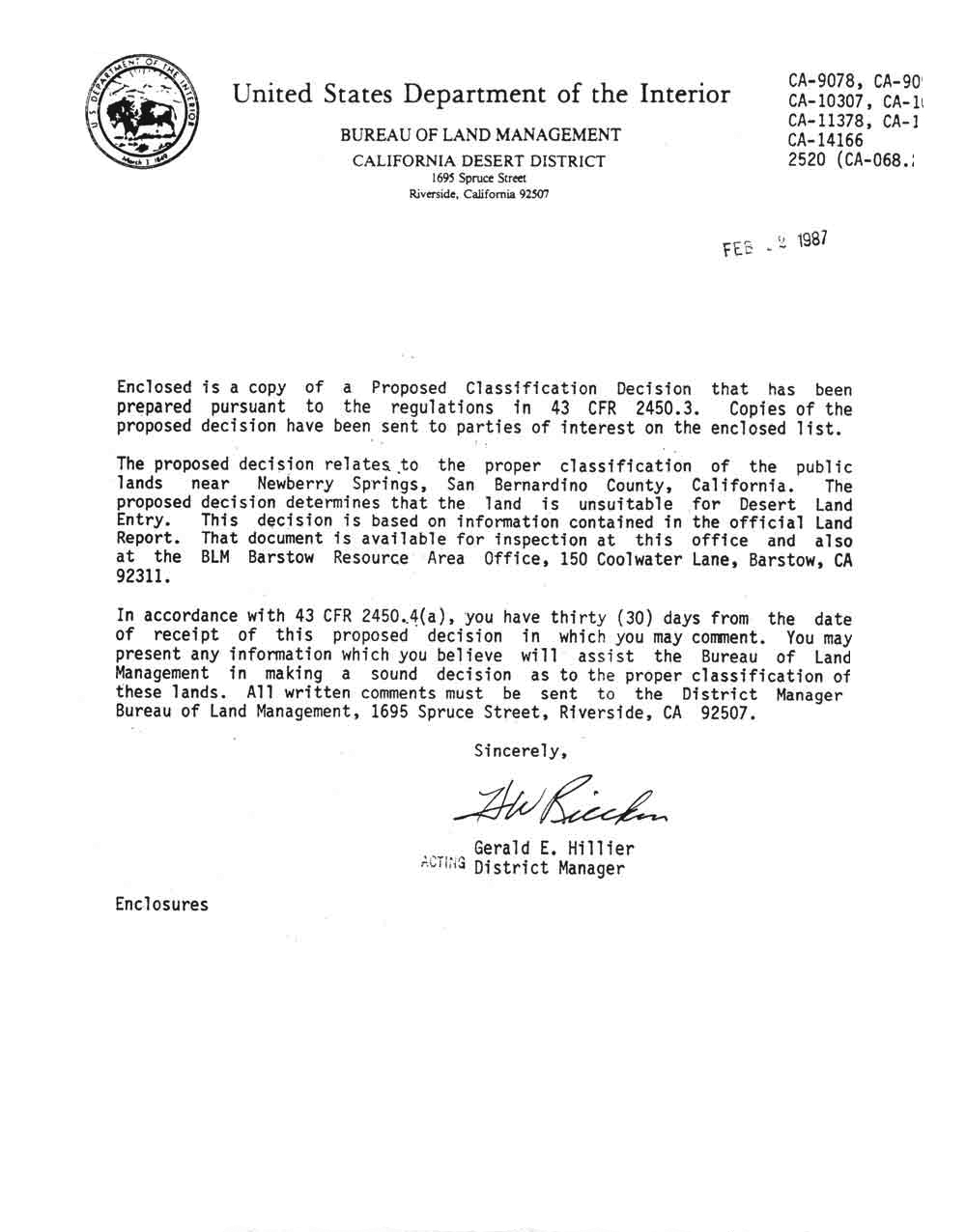